Christopher J. Helvey is a graduate of the Spalding University MFA in Writing program. His fiction and poems have appeared in numerous magazines and journals, including Kentucky Monthly, Idiolect, Kudzu, Nougat, The Chaffin Journal, Ace Weekly, Kentucky Blue, Modern Mountain Magazine, Minnetonka Review, Issue 4, and Best New Writing, 2007. On the Boulevard is his poetry collection and his novel, Purple Adobe, is available from AuthorHouse or fine bookstores everywhere. He lives and writes in Frankfort, Kentucky.

In addition to his current writing career, Christopher J. Helvey is Editor/Publisher of the journal, Trajectory: Writing That Illuminates. He is Fiction Editor on the staff of the Annual Anthology of Best New Writing.   Part 2 of our interview will look at his work as an Editor/Publisher.

Part 1 of our Interview will focus on your work as a poet, novelist, and short story writer.
Jan:     Thank you Chris for taking time for this interview.  I didn’t realize it until I began to prepare for this interview that I had seen your poems in Minnetonka Review, a literary journal I used to enjoy reading and subscribed to until recently. In fact that journal was on my list of journals that I had hoped would someday publish my work. Sadly, it has ceased publication. I sent them work for their contests on several occasions.
Minnetonka Review published some of your early poems, including “On the Boulevard,”the title poem for your poetry collection by the same name.  Tell us about that collection.  What is the story behind the story for the birth of your favorite poems in this collection? I’ve downloaded “On the Boulevard” below.
Chris:     First, Jan, let me echo your sadness on the passing of the Minnetonka Review. What a wonderful little journal that was. Troy Ehlers, the Editor in Chief, is a friend of mine from Spalding Days, and a fine writer himself. “On the Boulevard” was one of those poems that came full-blown into my mind. It pays homage to Hemingway and Bukowski and the noir works of the 1950’s. I thought it was a good poem and that it made a catchy title. In addition to the title poem, I suppose two of my favorites are “My Mother Bares Her Breasts in Church.” which is based on a true story of my mother baring her breasts to show her Sunday School class her scars following cancer surgery, and “Missouri Nocturne,” which evokes my childhood memories of hearing my father singing on our front porch during summer evenings in Crane, Missouri.

Chris:     My novel owes a great deal to a man named Kenneth Millar. Mr. Millar wrote under the name Ross Macdonald and his Lew Archer detective series is one of the finest by an American. Lew Archer was always driven by a sense of justice, tempered by mercy, and I suppose my protagonist, Ward Evans, shares those qualities.

Jan:     These characters are memorable, but ‘place,’ by that I refer to the western setting, seems to take on the role of a character too.  What drove this novel and which came first as you were writing: characters, plot, or setting?

Chris:      Purple Adobe began with the opening sentence which came to me from another dimension very early one morning: “The day died a purple death against the cracked adobe wall.” Jan, you are a perceptive reader. Place, indeed, is very much a character in this novel. I have long loved the American west, especially the lonely, and starkly beautiful deserts. I suppose what drove this novel was a sense of encroaching darkness in all our lives, and the light (of love? justice? humanity?) which saves so many of us in the end. 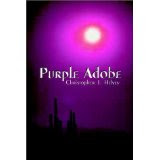 Jan:     Writers learn new things as they evolve as a writers, what did you learn from writing Purple Adobe?  What would you change if you sat down to write this novel now, ten years later?

Chris:    I suspect that one learns more by our failures than our successes. While Purple Adobe has a number of good qualities (strong sense of place, a story that moves along nicely, a theme that justice prevails),  it is far from a perfect work. It suffers at times from the dreaded “purple prose” syndrome, and in the days when I was working on that novel I was afflicted with “simileitis”(too many similes). Brad Watson, author of The Heaven of Mercury, first recognized that I had this illness when I was a student in one of his workshops at Spalding. Today, I would utilize a much more sparse language, utilize less description, and cut down on the sex scene.  Less, indeed, is often more.

Jan:     You are a graduate of the MFA program at Spalding University.  Tell us what you gained and what you may well have lost as a result of your graduate program experiences.

Chris:      I don’t know that I have lost anything as a result of my time at the Spalding MFA program. I met so many wonderful people and learned so many lessons. Two of those lessons that stand out were how to take criticism and how critical rewriting is. I gained a sense of belonging to a greater community of writers, a better understanding of what makes a story work, and many wonderful friends.

Jan:      I agree. Having a community of writers provides support. And most new writers don’t fully appreciate the importance of rewriting in the writing process to bring out the best of a work. If you were to describe your idea of the (almost) ‘perfect’ short story, what elements would it have? And which stories come closest to your vision of a perfect story?

Chris:     Jan, that is a really tough question to answer. Of course, there is no ‘perfect’ short story, but for me it would be written with an almost brutal economy of language, yet at the same time contain a new vision, a new way of looking at the world, and I am a huge fan of what I call “hammer-time” endings, endings that leave you changed, endings that leave you a different person from who you were before you read them. As for an almost perfect short story, I’d have to select “Cathedral” by Raymond Carver, or maybe,”The Killers,”or “Hills Like White Elephants,” and “The Short Happy Life of Francis Macomber” all by Ernest Hemingway.

Jan:     Your literary journal, Trajectory keeps you busy meeting deadlines, but in your own writing life, what are you writing now?

Chris: I’m polishing up a collection of some of my best unpublished short stories (my working title is Clawhammer) and I will start sending it around soon. I’ve also just finished first drafts of a novel and a novella. It is way too early to know if they will be keepers, or merely good workouts.

Jan:     Who are your literary influences?

Chris:     Hemingway, without question, would have to be foremost–for the freshness of his language if nothing else. Ross Macdonald, as noted above, is another. I would also have to give credit, or blame as the case may be, to Raymond Carver, Richard Ford, for his early stories, Bukowski,  Larry Brown, and, for his glorious, moving descriptions of place, James Lee Burke. One of my core beliefs is that every writer we read influences us to some degree, in one direction or another. Some influence to write in a certain manner, or on certain subjects. Others send us scurrying in another direction, vowing never to write like that.

Jan:     What book has had the greatest impact on your writing life?

Chris:   Without a doubt, I’d have to say The Sun Also Rises. In that novel Hemingway made me aware for the first time that there was another, often better, way to say things, that language was pliable and could be molded. Also, in that work he also taught me a good deal of what I know about writing dialogue.

Jan:     What are you reading now?  What are the top four books on your ‘to read’ stack?

Chris:      I’m one of these people who keep dipping into several books at once. At the moment, I am reading The Same Terrible Storm  (stories) by Sheldon Lee Compton, a promising young writer and friend from Kentucky (by the way the stories are brief, dark, brutal, and beautiful), Men in the Making (stories) by Bruce Machart, Rope Burns (stories) by F.X. Toole, The Sojourn (novel) by Andrew Krivak, Welding with Children (stories) by Tim Gautreaux, what matters most is how well you walk through the fire (newly relased poems) by Bukowski, Fitzgerald and Hemingway, Works and Days (collected essays) by Scott Donaldson, and a number of Slave Narratives (interviews with former slaves collected by state) from the Federal Writers’ Project of the WPA (1936-1938).

Jan:     Is there a “must read” book on writing that you would recommend to any aspiring writer?

Chris: There are several good, useful books on “how to write.” Three that I’ve found beneficial are Writing the Novel by Lawrence Block, Writing Down the Bones by Natalie Goldberg, and Writing Fiction, A Guide to Narrative Craft by Janet Burroway and Elizabeth Stuckey-French. Oh, and I want to mention as helpful, Burning Down The House, Essays on Fiction by Charles Baxter. Richard Goodman has a book on writing out that is both edifying and challenging. The title is The Soul of Creative Writing. One that is replete with literary gems is Ernest Hemingway on Writing (a collection of his comments in letters, interviews, commissioned articles, edited by Larry W. Phillips).

Jan:     What is the most useful writing advice you’ve ever received and what advice  have you wisely chosen to ignore?

Chris: The two best pieces of writing advice I’ve ever received are “Quit talking about writing and sit down and start writing” (paraphrased from a number of excellent teachers and writing gurus) and “Baby, you don’t want to take five pages to get your hero from one end of a barn to the other.” That one is from my wife and it stuck a dagger through one of my greatest weakness as a writer, which is never use one good adjective or simile when you might be able to squeeze in two, or three, or four…

As for the piece of advice I’ve chosen to ignore: “Write only what you know.” What bad advice! If we listened to those words most of the novels and stories we write would surely be rather boring. If everyone followed that advice there would be no science fiction written and darn fewer murder mysteries. The person who first gave that advice must have blanked on the use of imagination. Perhaps it is okay to start a novel or story writing about what you know, but my advice is to start letting the imagination flow, and sooner rather than later.

Tune in Next Tuesday for – Part 2 of Christopher J. Helvey’s Interview.  For Submission Guidelines & Subscription Information for Trajectory – Go to: www.trajectoryjournal.com