Background Notes:
D.L. Wilson was President, CEO, and Managing Director of U.S. and European corporations and consultant to industries and governments in 32 countries. His extensive international travel spawned a fascination with world cultures and exotic locales. His first book, The Kitchen Casanova–A Gentleman’s Guide to Gourmet Entertaining for Two, was featured on CNN, Evening Magazine, and Regis & Kathy Lee. 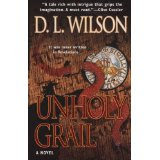 Wilson’s first novel, Unholy Grail, became a national bestseller and has been translated into eight languages. He has received praise from New York Times bestselling thriller authors. Clive Cussler called Unholy Grail “a tale rich with intrigue that grips the imagination. A must read.” James Rollins said Wilson’s latest novel “Sirocco is both a razor-edged thriller and a tour de force.” Steve Berry said “D.L. Wilson is a wry, appealing voice in the thriller world. This one is well worth a look.”     Learn more about D.L. Wilson at his website: dlwilsonbooks.com

Jan:     Your books are described as thrillers.  What do you see as the most essential ingredients in a successful thriller?
D.L. Wilson:     A thriller novel must be exciting, a real page turner, a book that readers just can’t put down. A successful thriller must start with a bang, build excitement, create tension, and finish with a bigger bang. I found a real challenge in writing thrillers. My goal was to create fiction with content. I wanted my readers to become engrossed with my characters, scenes, and terrifying plots and after reading my novels, come away with a newer and better understanding of important factors in our complex world.
Jan:     Your first novel, Unholy Grail, reached the best seller list just behind one of Stephen King’s books and has been translated into eight languages.  Tell our readers a bit about this book and why they might enjoy reading it.
D.L. Wilson:     Unholy Grail, is based upon broad research into the facts, legends, myths, and even conspiracy theories relating to Christianity and Judaism. A trip to Vienna, Austria and the South of France presented great insight into Fr. Berringer Saunier who had somehow amassed great wealth and built a beautiful church and villa in the small village of Rennes-le-Château high in the Pyrénées.   In Unholy Grail, I created a Fordham University theology professor, Fr. Joseph Romano, who receives an anonymous call offering him a secret Gospel written by James, the brother of Jesus. When he arrives at Grand Central Station to meet the mysterious caller, a shot rings out, bedlam erupts, and Fr. Romano is thrust into a centuries-old conspiracy that threatens the very sanctity of the church.
Jan:     When did you begin writing and why this particular genre?
D.L. Wilson:     As part of my day job in the fashion industry I traveled to over 32 countries. During countless hours on airplanes, I became a novel reading junky. After reading 100s of thrillers, I decided to focus on that genre and try my hand at becoming a writer when I retired.     To learn about the publishing world, I attended writing conferences and workshops where I learned that writing is an art and a craft that requires serious dedication. Top authors shared their secrets on how they became published. They wrote a few novels that never saw the light of day to learn the craft. I followed their advice and learned the importance of practice, practice, practice.
Jan:     How did you find your publisher and agent?  How did you go about marketing your books?
D.L. Wilson:     As I was finishing my first serious novel, Unholy Grail, I decided to learn what transpired in the inner sanctum of agents and editors. I wrote articles for Writer’s Digest and The Writer where I interviewed agents and editors to learn from the experts their criteria for weeding through hundreds of submissions each month. One of the agents I interviewed asked me what I was working on and asked me to submit my novel to him. I was at the right place at the right time. He liked my work and got me a contract with Berkley, Penguin.
Marketing and promoting novels is a whole different world that is changing every day. Book signings, establishing a web site, Internet promotion, social networking, interviews, conferences, advertising, it goes on and on and on. I have found the promotional work takes a great toll out of an author’s writing time.
Jan:     Your latest book, Sirocco, is described as a bio-terrorism thriller.  How is this book different in its structure and focus from Unholy Grail?  What did you do to research your book?

D.L. Wilson:     SIROCCO, is a bioterrorism thriller. I met with experts in biotechnology, pharmacology, and medicine to learn about the potential dangers of bioterrorism. I studied Islam and interviewed Muslims to try to understand how a religion could be used as a foundation for terrorism. It’s people who are terrorists, not religions.

To keep the thrill alive, I had to start with a bang. Brett Reynolds, an attorney representing the pharmaceutical lobby, is summoned to Washington for an urgent meeting by Homeland Security to investigate a threat by a Middle Eastern terrorist group, Sirocco, to unleash a bioweapon at the heart of the United States. With a bioterror looming that could devastate the U.S., Brett learns of his brother’s death in a bizarre murder/suicide. As the plot unfolds he discovers connections between his brother and the terrorist threat. His investigation leads him on a harrowing chase that ends in a deadly confrontation with Sirocco and a chilling climax in the Oval Office
Jan:     I understand that Sirocco has gotten rave reviews from a number of international best selling suspense/thriller authors.   Who are some of the more notable and how were you able to gather these wonderful reviews from other thriller writers?
D.L. Wilson:     I was honored to receive great reviews from Steve Berry, James Rollins, and Andrew Gross who are some of the top authors in the suspense/thriller field. I learned the great importance of networking from my business career and experiences as a novice author. I was very fortunate to meet top authors in my genre at conferences and writing events and some of them agreed to read my manuscript and liked my writing style.
Jan:     You were recently elected to the board of the International ThrillerWriter.  Couldyou tell our readers more about this writers organization and your duties as VP of Membership.
D.L. Wilson:     The International Thriller Writers (ITW) is an honorary society of authors, both fiction and nonfiction, who write books broadly classified as “thrillers.” The organization provides opportunities for mentoring, education and collegiality among thriller authors and industry professionals and grants awards for excellence in the thriller genre. ITW promotes literacy, gives money to worthy organizations, supports libraries, a USO tour, and advances the genre. It brings together almost a thousand writers, readers, publishers, editors and agents at its annual conference, ThrillerFest, as well as at CraftFest, a writing workshop program, and AgentFest, where aspiring authors can meet and pitch top literary agents.
I was honored to have been elected to the board of directors as VP of Membership where I am responsible for bringing on board Active and Associate members. You can find out more about ITW at our website: thrillerwriters.org
Jan:     So who are some of your early favorite writers in the thriller genre who had a lasting influence on your work?
D.L. Wilson:     Some of the thriller authors who inspired me are: James Patterson, David Baldacci, John Sanford, Dan Brown, Steve Berry, James Rollins, Clive Cussler, Andrew Gross, and the list goes on. I try to read as many authors as I can. I learn bits and pieces of their writing techniques that hopefully will help me improve my style and keep my readers turning the pages.
Jan:     What is the worst advice and what is the most useful advice that you’ve received during your writing career?  What words of encouragement can you offer to those hoping to break through in the thriller genre?
D.L. Wilson:     I really haven’t gotten any bad advice during the many years I spent developing my writing career. I’ve found authors are very forthcoming with sharing their experiences in how they’ve fought to succeed in the writing world. It’s a very close-knit group who appreciate the years of dedication and focus necessary to get that first book published. Steve Berry on his website shares his long and arduous road to getting published spanning 12 years and 85 rejections over 5 separate manuscripts.
My advice to those hoping to break through in the thriller genre is to stick with your hopes and dreams. Keep learning, keep reading, keep writing. It’s like learning a musical instrument. It takes time, dedication, and practice, practice, practice.