Susan Sontag observed that photography is described as either a precise act of knowing or as an intuitive mode of encounter. But I suspect many fine photographs are as a result of fortunate circumstance, or what is better known as luck, aided by a dash of human perseverance.

While going through the Panama Canal on a rainy morning last week I went out on our balcony to photograph multiple rainbows.
In the process I saw hawks, pelicans, egrets, herons, and gulls soaring over the adjacent rainforests.

Just as I shot this photograph a bird flew across the rainbow. It was not a precise or even an intuitive photo. It was the direct result of luck.

I was not sure which bird it was until I zoomed in later and discovered it was a pelican. Even if I had tried all morning, I would have been unlikely to get this photo. I happened to be standing in the right place at the right time.

I believe that various combinations of luck, skill, and strategy play important roles in successful endeavors. Skill and strategy seem to be major factors in successful outcomes, so I put a large percentage of my effort into managing those. And yet, one cannot deny that luck is always the wild card in life. And while as a writer I like to think skill and strategy are the essential ingredients to my efforts, it helps me to remember that luck does sometimes play an unanticipated role. 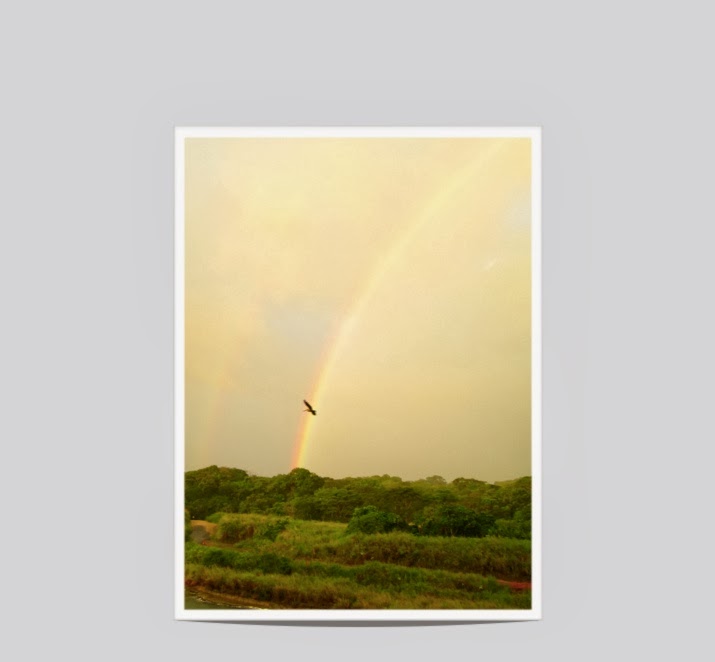 “Photography is a system of visual editing. At bottom, it is a matter of surrounding with a frame a portion of one’s cone of vision, while standing in the right place at the right time.”  quote from John Szarkowski in Susan Sontag’s On Photography.
=======================
About Jan Bowman
Winner of the 2011 Roanoke Review Fiction Award, Jan’s stories have been nominated for Pushcart Prizes, Best American Short Stories, and a Pen/O’Henry award.  Glimmer Train named a recent story as Honorable Mention in the November 2012 Short Story Awards for New Writers.
A recent story was a finalist in the 2013 Phoebe Fiction Contest; another was a 2012 finalist in the “So To Speak” Fiction Contest.  Jan’s fiction has appeared in numerous publications including, Roanoke Review, Big Muddy, The Broadkill Review, Third Wednesday, Minimus, Buffalo Spree (97), Folio, The Potomac Review, Musings, Potato Eyes and others.   She is working on two collections of short stories while shopping for a publisher for a completed story collection, Mermaids & Other Stories.  She has nonfiction publications in Trajectory and Pen-in-Hand. She writes a weekly blog of “Reflections” on the writing life and posts regular interviews with writers and publishers.   Learn more at: www.janbowmanwriter.com or  visit blog:  http://janbowmanwriter.blogspot.com
Facebook:  janbowman.77@facebook.com