K. L. Cook’s story collection, Love Songs For The Quarantined, winner of the 2010 Spokane Prize for Short Fiction, realistically probes the pain of lost dreams. These 16 stories sing of promises we make, not only to significant people in our lives (spouses, children, siblings, parents, and friends), but also to ourselves. The collection of stories examines the woven strands between people, as they negotiate those promises, betray them, and keep them, even when keeping them has the probable outcome of destroying aspirations.
From the opening story, “Bonnie and Clyde in the Backyard”(previously published in Glimmer Train) to the final story “Relative Peace,” Cook’s stories explore the power of longing for family love that eludes, and the long-term shame these narrators live with, as a result of all the subtle betrayals of those they love and those they should love. While the first story seems to be out of time with the other 15 stories, a careful rereading suggests that unity of theme, the ambiguity of strained relationships, is the glue that holds the collection together throughout. Whether the strain comes from a sick or dying child, an unspoken lie, or animosity between brothers, fine, thread-like strands, filaments, connect family as surely as muscle, bone and DNA. 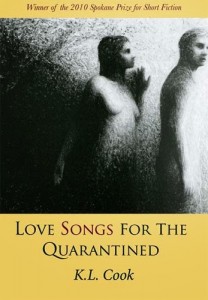 For example, that theme of strained relationships, tenuously bound with toxic ties, drives the powerful story, “Filament”in which a sliver of metal in Blue Simpson’s eye drives his downward spiral.The first paragraph of this masterfully crafted story tells the reader everything, except the how and then what, in a way that resonates with readers long after the book is closed.
Filament, a term used in biology to describe linked protein structures, provides form and substance to tissue. It is also used to denote part of the male part of a flower, the stamen. These stories ring with the masculine voice, even when masterfully using full-blown omniscience or second person voices. The ‘masculine’ voice here sings of the body in second person stories like “What They Didn’t Tell You About A Vasectomy,” giving this story and others, a view of the inner world of the modern family-oriented male. In this story the narrator, who has agreed with his wife’s decision to have no more children, betrays her trust by withholding information about his elevated sperm count.
“You hover above your wife. A glistening thread connects you to her, and you watch for a second as it stretches between you both, an ordinary miracle. You imagine, in that split-second, the contents of the luminous thread under a microscope, millions of tadpoles swimming in thin milk, their tails wriggling frantically. Alive.
Go, you think. Go!”
The story “Orchestration” sings of the joys, and the heartbreaking, mind-numbing chaos of family life with small children. The male voice sings of family with the aching thrum of a blues singer. It’s an amazing two page, one-sentence song that first appeared in Harvard Review. Such is the power of these complex links that structure a family.
Long chains of thread-like protein connect end-to-end in these stories, like those found in hair and muscle. And in these Love Songs for the Quarantined, fine shimmering threads connect families in love and betrayal, and to the subsequent joy, grief and guilt that is inherent in families.
K. L. Cook is the author of two books of fiction: Last Call, winner of the Prairie Schooner Book Prize; and The Girl from Charnelle, winner of the Willa Award for Contemporary Fiction and an Editor’s Choice selection of the Historical Novel Society. He teaches at Prescott College and Spalding University’s brief-residency MFA in Writing Program and the University of Iowa.
Trajectory Journal: Writing That Illuminates – Spring 2013, Issue 6 – published Jan Bowman’s Interview with K. L. Cook. And it has been also published online at the website for Willow Springs Editions. The complete interview can be read:
Willow Springs Editions – under events section.  Or go to Jan’s Facebook site.
==================================
About Jan Bowman
Winner of the 2011 Roanoke Review Fiction Award, Jan’s stories have been nominated for Pushcart Prizes, Best American Short Stories, a Pen/O’Henry award.  Glimmer Train named a recent story as Honorable Mention in the November 2012 Short Story Awards for New Writers.
A recent story was a finalist in the 2013 Phoebe Fiction Contest; another was a 2012 finalist in the “So To Speak” Fiction Contest.  Jan’s fiction has appeared in numerous publications including, Roanoke Review, Big Muddy, The Broadkill Review, Third Wednesday, Minimus, Buffalo Spree (97), Folio, The Potomac Review, Musings, Potato Eyes and others.
She is working on two collections of short stories while shopping for a publisher for a completed story collection, Mermaids & Other Stories. She has nonfiction publications in Trajectoryand Pen-in-Hand. She writes a weekly blog of “Reflections” on the writing life and posts regular interviews with writers and publishers.   Learn more at:  www.janbowmanwriter.com or        visit blog:  http://janbowmanwriter.blogspot.com
Facebook:  janbowman.77@facebook.com