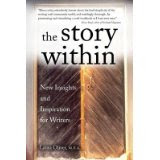 In Laura Oliver’s wonderful book, The Story Within: New Insights and Inspiration for Writers, she suggests that writers go back and read just the last page of stories under revision to see if you still like your ending.Then she suggests that writers …”try reading just the last two paragraphs of every story in an anthology. Amazingly, many of the great ones are interesting, moving, or entertaining, even when you haven’t read the rest of the story.”

So I returned to several stories from The Best American Short Stories of 2012, edited by Tom Perrotta and selected a couple to pull out some endings to examine.  See what you think of these endings.

“And you can tell that Shoshana is thinking of her kids, though that’s not part of the scenario. You can tell that she’s changed part of the imagining. And she says, after a pause, yes, but she’s not laughing. She says yes, but to him it sounds as it does to us, so that he is now asking and asking. But wouldn’t I? Wouldn’t I hide you? Even if it was life and death – if it would spare you, and they’d kill me alone for doing it? Wouldn’t I?
Shoshana pulls back her hand.
She does not say it. And he does not say it. And of the four of us no one will say what cannot be said – that this wife believes her husband would not hide her. What to do? What will come of it?
And so we stand like that, the four of us trapped in that pantry.
Afraid to open the door and let out what we’ve locked inside.”
Mary Gaitskill’s “The Other Place” from The New Yorker.
“The hurts of childhood that must be avenged: so small and so huge. Before I grew up and stopped thinking about her, I thought about that woman a lot. About what would’ve happened if I’d gotten her there, to the abandoned house. I don’t remember anymore the details of these thoughts, only that they were distorted, swollen, blurred: broken face, broken voice, broken body left dying on the floor, watching me go with dimming, despairing eyes.
Those pictures are faded now and far away. But they can still make me feel something.
The second time I put my hand on Doug’s shoulder, he didn’t move away inside; he was too busy tuning in to the line and the lure. Somewhere in him is the other place. It’s quiet now, but I know it’s there. I also know that he won’t be alone with it. He won’t know I’m there with him because we will never speak of it. But I will be there. He will not be alone with that.”
In fact, I’ve gone back to several anthologies and journals to read just endings, even those stories I’ve not read before, and I’m noticing how powerful imagery, gesture and metaphor can be when used effectively in a story. Because when you reach “The End” of your own story or someone else’s story, you see something that you’ve never quite noticed before. And perhaps you’ll be a better writer because of it. Check out the beginnings of these two stories in Entry #151 that I posted on my blog for May 31, 2013.  Then maybe you’ll want to read both.
About Jan Bowman

Jan Bowman’s fiction has appeared in numerous publications including, Roanoke Review, Big Muddy, The Broadkill Review, Third Wednesday, Minimus, Buffalo Spree (97), Folio, The Potomac Review, Musings, Potato Eyes and others. Glimmer Train named a recent story as Honorable Mention in the November 2012 Short Story Awards for New Writers. Winner of the 2011 Roanoke Review Fiction Award, her stories have been nominated for Pushcart Prizes, Best American Short Stories, a Pen/O’Henry award and a recent story was a finalist in the 2013 Phoebe Fiction Contest; another was a 2012 finalist in the “So To Speak” Fiction Contest. She is working on two collections of short stories while shopping for a publisher for a completed story collection. She has nonfiction publications in Trajectoryand Pen-in-Hand. She writes a weekly blog of “Reflections” on the writing life and posts regular interviews with writers and publishers.   Learn more at www.janbowmanwriter.com or