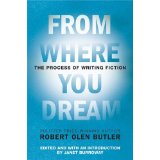 Robert Olen Butler’s book, From Where You Dream: The Process of Writing Fiction, edited with an introduction by Janet Burroway, is a must read for any aspiring fiction writer.
I had the good fortune to have a class with Butler at the Iowa Summer Writing Festival the year in which he won a Pulitzer Prize for his fiction collection, A Good Scent From A Strange Mountain, and he was beginning to explore the power of yearning in fiction.

Burroway says that Butler’s “self declared obsessions have to do with the descent into the dream space of the unconscious, in order to discover the yearning at the center of every person, and therefore every character, and with the moment-to-moment sensual experiencing of that character’s story.”

Burroway summarizes it as,  “He (Butler) proposes fiction as the exploration of the human condition and yearning as its compass. …He conducts and suggests exercises to achieve the DREAMSPACE and he offers insights into the nature of voice. Butler is most eloquent in his discussions on fiction when he describes it as “cinema of the mind,” to be experienced by the reader (and the writer) as a sensed series of takes and scenes. Which is to say – the fiction writer as filmmaker provides a different mental and emotional process. And he has devised a system whereby revision is undertaken at the level of structure rather than sentence.” 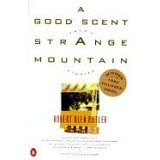 So go and dream your stories and write them down in the “white-hot center” of your vision of the deepest yearning of flawed people.
========================================
About Jan Bowman
Jan Bowman’s fiction has appeared in numerous publications including, Roanoke Review, Big Muddy, The Broadkill Review, Third Wednesday, Minimus, Buffalo Spree (97), Folio, The Potomac Review, Musings, Potato Eyes and others. Glimmer Train named a recent story as Honorable Mention in the November 2012 Short Story Awards for New Writers. Winner of the 2011 Roanoke Review Fiction Award, her stories have been nominated for Pushcart Prizes, Best American Short Stories, a Pen/O’Henry award and a recent story was a finalist in the 2013 Phoebe Fiction Contest; another was a 2012 finalist in the “So To Speak” Fiction Contest. She is working on two collections of short stories while shopping for a publisher for a completed story collection. She has nonfiction publications in Trajectoryand Pen-in-Hand. She writes a weekly blog of “Reflections” on the writing life and posts regular interviews with writers and publishers.   Learn more at www.janbowmanwriter.com or
visit blog:  http://janbowmanwriter.blogspot.com