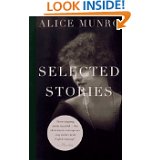 Munro says in this introduction and numerous essays that she doesn’t necessary start writing or reading a story from beginning to end. She says that she often starts anywhere and might read or write a story either backward or forward in an effort to see the full experience from different perspectives. And while this might sound odd to some readers and writers, I understand this search for perspective.
I had an “Aha” moment when I first read this, because I do that too. I’ve thought about it often and recently, I mentioned to a writer friend, that I don’t necessarily start a story and work chronologically, whether I’m reading it or writing it. I find the beginning, middle, and ending as the story unfolds in multiple readings and revisions.  The center of a story burns like a white hot rock in my consciousness.  I know that a story is there – just a bit out of direct sight, but I know that a story can be elusive, until I begin to put it on the page. I read that Flannery O’Connor said that she didn’t know what she had to say until she saw it on the page.
—————————————————————————-

Alice Ann Munro is a Canadian short-story writer, the winner of the 2009 Man Booker International Prize for her lifetime body of work, a three-time winner of Canada’s Governor General’s Award for fiction.

About Jan Bowman
Jan Bowman’s fiction has appeared in numerous publications including, Roanoke Review, Big Muddy, The Broadkill Review, Third Wednesday, Minimus, Buffalo Spree (97), Folio, The Potomac Review and others. Glimmer Train named a recent story as Honorable Mention in the November 2012 Short Story Awards for New Writers.Winner of 2011 Roanoke Review Fiction Award, and her stories have been nominated for Pushcart Prizes, Best American Short Stories, Pen/O’Henry Awards and a story was a finalist in the “So To Speak” Fiction Contest. Another story was a recent finalist (April 2013) in the Annual Phoebe Fiction Contest. She is working on two collections of short stories while shopping for a publisher for a completed story collection. Learn more at www.janbowmanwriter.com or
visit blog:  http://janbowmanwriter.blogspot.com