Sheldon Lee Compton – Author of the Short Story Collection: That Same Terrible Storm – Interviewed by Jan Bowman and published in the Fall 2012, Issue 5 of Trajectory: Writing That Illuminates. excerpt from Trajectory website –  For the complete interview subscribe or order a copy of Issue 5 by going to www.trajectoryjournal.com 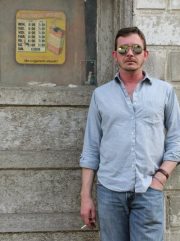 Sheldon Lee Compton’s new collection of short stories, The Same Terrible Storm, (2012) is published by Foxhead Books. The entire interview with Jan Bowman appears in the Fall 2012 print issue of Trajectory.
Jan:    How did you go about selecting and organizing the twenty-two stories included in The Same Terrible Storm?

Sheldon:    I had more or less been writing regional stories, stories of Eastern Kentucky and the South, for a long period of time, say from 2006 up through the spring of 2008. And by this, I mean exclusively. Then at some point in 2008 I started noticing some solid work online, particularly flash fiction. I had written stories of this length before, but now I wanted to write outside the boundaries of the South or Eastern Kentucky. The shorter form seemed to allow me this in some way. When it was all said and done, I had an assortment of stories that needed separating. When I did this, I had the longer form, regional stories with a mix of flash that was also regional. I combined them and tried to give the reader an up and down of long then short, as best as I could.
Jan:  I noticed you have ten first person and ten third person point of view stories. And some stories have characters with the same names. Were these stories intended to be part of longer work? Is there some significance in this narrative structure?
Sheldon: If I said I had a structure in mind in that sense, I’d be lying. I can say I noticed many of my stories were in first-person, and so pushed myself to write in third and other points of view. Some stories were at one time bits and pieces of a novel I had written and shelved some years before, but these were few and greatly altered by the time they were finished. I may have thrown the same name on some characters here and there with a connective thread in mind, but it’s not a notion I followed up on. Once the idea of a linked collection of stories was set aside, I just left the names. Where I’m from a lot of people do have the same names, common names, and so it seemed natural enough.
Jan: If you were to describe your idea of the perfect story, what elements would it have? And which story in your collections comes closest to realizing the image that you had in your mind when you began to write it?

Sheldon: A perfect story takes you out of this world and into another. That has most very likely been said before, and should be said another time and another. The means by which each writer gets there may differ, of course. I have never set out to accomplish this, but I do write for myself first, and others after that. I take myself back to those times, or forward, depending on my mood. If there’s a story that takes me away into the past, I allow it, and if there’s a story that boldly takes [me] into the future, I follow. The story in the collection that most did that for me was “Purpose.” I allowed myself to step aside for this story, to allow the characters I had chosen to act it out, to speak freely and openly, and take what-ever direction they wanted. I followed. I rarely elevate these kinds of feelings and resulting actions, but this is not the case for me in this story. I allowed Brown Bottle, the main narrator, to take this story from my hands. He did well, and I thank him, and trust him.
The complete interview was published in the Fall 2012, Issue 5 of Trajectory: Writing That Illuminates. this excerpt (used with permission of the editor) comes from the Trajectory website.
For the complete interview go to www.trajectoryjournal.com       To subscribe or order a copy of Issue 5 of Trajectory.
Jan Bowman’s work has appeared in Roanoke Review, Big Muddy, Broadkill Review, Trajectory, Third Wednesday, Minimus, Buffalo Spree (97), Folio, The Potomac Review, Musings, Potato Eyes, and others. She won the 2011 Roanoke Review Prize for Fiction.  Glimmer Train nominated a story as an Honorable Mention in the November 2012 Short Story Award for New Writers. Her stories have been nominated for two Pushcart Prizes, two O’Henry Awards, Best American Short Stories and a story was a finalist in the “So To Speak” Fiction Contest. She is working on two collections of short stories and currently shopping for a publisher for a completed story collection. She has nonfiction work pending publication in Spring 2013 Issues of Trajectory and Pen-in-Hand. She writes a weekly blog of “Reflections” on the writing life and posts regular interviews with writers and publishers.   Learn more at:
Website – www.janbowmanwriter.com
Blogsite – http://janbowmanwriter.blogspot.com