John Reisinger is the author of a Roaring 20’s Mystery series featuring Eastern Shore detectives Max and Allison Hurlock. His recent mysteries are based on real-life cases that occurred in the 1920’s, as are his earlier works, Nassau and Evasive Action. In addition, John is the author of Master Detective, a well-researched book about Ellis Parker, his career as a detective, and his controversial involvement in the investigation of the infamous Lindbergh kidnapping of 1932. 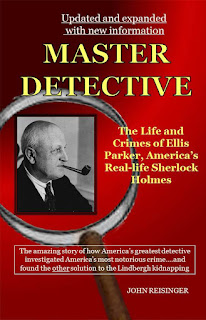 Master Detective has been published in both hardback and paperback, and has also been published in Chinese editions in both Taiwan and Mainland China. Timeframe Films, producers of films for both Nova and the History Channel is currently planning a feature film length version of the book. John is a former Coast Guard officer and civil engineer.
His website is www.johnreisinger.com

Part 2 – Interview with John Reisinger
Jan:    Many of your books are set on the East Coast, in particular, the Eastern Shore of Maryland and parts of Delaware.  How much does actual ‘place’ influence the events and descriptions in your mysteries? 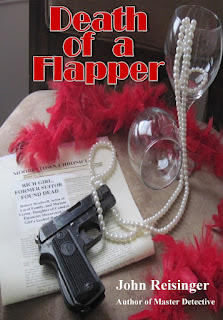 John:    Well, what distinguishes any one mystery from all the thousands out there? I believe it’s a unique combination of the characters, the crime, and the setting. Even Sherlock Holmes owes much of his popularity to the atmosphere of the fog-bound streets of London, with its hansom cabs and gaslights. Moorestown, and nearby Philadelphia are part of the action in Death of a Flapper, while the Jekyll Island Club is the framework on which the entire story of Death on a Golden Isle hangs. The same goes for Crisfield and the Bay in Death at the Lighthouse, and 1920s New York in the upcoming Death and the Blind Tiger. And of course, the Hurlocks’ home town of St Michaels and the surrounding area shows up in all the books. The aim is to make people feel as if they have been to these places, or, at least, now know more about them.

Jan:    The series features Max Hurlock, who is this man?  Is he based on a real person from the roaring 20’s or is he a more modern construction of a character?
John:    I always tell people that Max and Allison are like my wife, Barbara and me, only younger, better-looking, and more inclined to say clever things. I wanted a distinctive Eastern Shore name, so Hurlock filled the bill. The name Max is from Macks Lane, a road on the way to Tilghman Island.  The name Allison is from Peyton Place. Allison’s maiden name Winslow is from Winslow Homer, and reflects her intellectual interests.
Actually, Max is a down home Eastern Shore native who crossed over to the Western Shore just long enough to get an engineering degree from the University of Maryland in 1917.  He worked at a service station/garage to pay the bills and there he met a Goucher girl named Allison Winslow, on her way back from research in Washington. After graduation, Max went into the WWI Navy and he married Allison and moved back to the Eastern Shore in 1920.
Max’s real interest is in engineering, technology, and flying; he doesn’t  really want to be a detective, but  he solved a crime while in the Navy, and people have been calling him “Sherlock Hurlock” and coming to him with cases ever since.
Allison is a quasi-intellectual Western Shore Goucher graduate, constantly casting an amused but sympathetic eye at the shore and its ways. She also writes magazine articles, giving me a chance to work in background about whatever she’s researching and allowing her to find clues to the case in unexpected places.
Their home in St. Michaels is based on the Claiborne Cottage by the Bay, a Bed & Breakfast in nearby Claiborne owned by Eastern Shore Writer Association member Barbara Reisert. Max and Allison have set aside an upstairs bedroom as sort of a “black museum” to display souvenirs from their adventures. Friends and neighbors in St. Michaels:  include a know-it-all librarian Isis Dalrymple, gossipy switchboard operator, Thelma Lonnigan,  moonshiner Duffy Merkle, and watermen J.D. Pratt and Casper “no whiskey” Nowitsky.
Jan:    When you wrote the first of these mysteries, did you imagine it would become a successful series?  How did that come about?
John:    Success is a relative matter. When I hear from readers I am not related to, that’s success of a sort. Each book takes place in a different location and that place becomes a sort of character in the tale. This is a conscious decision to make each story unique and, I hope, memorable. I work in information about the people and the times through dialogue and end notes. I also explain the real case on which each book is based. Several people have told me that, in addition to enjoying the books, they felt they really learned something. For those who think reading a mystery is a sort of guilty pleasure, this provides an excuse to indulge.
The locations have helped in the book promotion. I gave a talk in New Jersey when Death of a Flapper came out, and the book launch/signing for Death on a Golden Isle was at Jekyll Island books in the historic section of Jekyll Island, Georgia. I have done signings and talks around St. Michaels, Easton, and Crisfield for Death at the Lighthouse.
Jan:    Your book, Master Detective, has just been re-released in a 2012 expanded edition with new information that has been uncovered since the original edition.  What is the new information you discovered?
John:    Since Master Detective came out in 2006, I have spoken to a lot of people about it, and in almost every case someone in the audience has some personal connection and has a bit of info to add. In addition, more newspaper files are now digitized, so I was able to find more accounts of incidents I had reported and people I had mentioned. Some of these reports conflicted with the originals.
For example, in one instance, Ellis Parker told one reporter in great detail how he had found the body of a missing girl. Other newspaper accounts I found later, however, indicated that the body was discovered by the local police and Parker wasn’t even there! I also was able to refine and flesh out earlier accounts of some of Parker’s cases and found some interesting follow up information on people involved in the Lindbergh case. For instance, I found that a man who was briefly an intermediary for the Lindberghs because of his underworld connections later became chief of police in Long Beach, Long Island. You can’t make this stuff up.
So I wanted to have an updated version that incorporated what I had learned.
Jan:    The Master Detective has been released in Taiwan and mainland China.  Why is there a strong interest in this book in these counties?
John:    The Chinese market is very strong for US books, and beyond that, the Lindberghs went on a goodwill tour of China in 1931during a great flood. They flew around surveying the damage and ferrying relief supplies, so there is still a lot of good will towards them.
Jan:     You are testing a new audience with your new series, Duckworth Chronicles. It’s so different from your previous work. Tell us about it and about what inspired you to explore this type of writing. 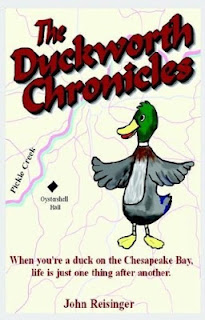 John:    Duckworth was a collection of stories I told my grandchildren. I was not really trying to break into a new field. The Duckworth stories are just fun tales, but have a sneaky sub theme about thinking for yourself and knowing when not to follow the crowd. Duckworth is always the only animal to be skeptical and keep his head when the others are panicking. I can’t stand the type of children’s stories where the animals act just like people, even down to wearing clothes, living in little houses, and preaching about the environment.

Duckworth and his pals are mostly concerned with getting food and avoiding becoming food. They understand human speech, but often misinterpret what people are talking about because they have no exposure to human thought and culture. They’re not cutesy-poo, but they each have their own personalities and quirks. When my grand kids see a white duck, they never say ‘There’s Donald,’ but when they see a Mallard, they say ‘There’s Duckworth!’
Jan:    So tell me about The Duckworth Project.
John:    Yes. We have set up what our family calls  The Duckworth Project. Although the Duckworth Chronicles are available on Amazon and some bookstores, we contribute 10 copies of the Duckworth Chronicles free of charge to children-related nonprofit organizations such as local churches and charities with the proviso that they involve the kids in selling them. The organization can then keep 100% of the proceeds.

Jan:    That’s nice. Giving back to the local community is a ‘win-win’ for everyone and sets a good example for the grand kids. As we end Part 2 of our interview, what advice about your own writing have you chosen to ignore? And what advice would you offer to encourage other writers?

John:    My only advice is to learn to shrug off rejection. Writing is like buying a lottery ticket with a word processor. Writing well is important, but so is chance.  Some of the most successful books on the shelf were once rejected, sometimes repeatedly. I wish writers good luck.

===================================
Jan Bowman’s work has appeared in Roanoke Review, Big Muddy, Broadkill Review, Trajectory, Third Wednesday, Minimus, Buffalo Spree (97), Folio, The Potomac Review, Musings, Potato Eyes, and others. She won the 2011 Roanoke Review Prize for Fiction. Her stories have been nominated for a Pushcart Prize, Best American Short Stories and a story was a finalist in the “So To Speak” Fiction Contest. She is working on two collections of short stories and currently shopping for a publisher for a completed story collection. She has nonfiction work pending publication in Spring 2013 Issues of Trajectory and Pen-in-Hand. She writes a weekly blog of “Reflections” on the writing life and posts regular interviews with writers and publishers.  Learn more at:
Website – www.janbowmanwriter.com
Blogsite – http://janbowmanwriter.blogspot.com