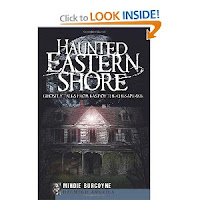 I am a writer and a traveler, with a ton of energy and wonderful travel partner (Dan Burgoyne). Together we roll along American roads with r-pod in tow, scouting out the best fishing spots, flatwater kayaking trails, historic towns, haunted houses, and the friendly people along the way. 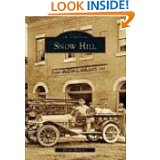 My full time job is with the Maryland Department of Business and Economic Development, where I get to help businesses and local governments in Maryland’s rural Eastern region. That job first exposed me to the treasures Maryland has in her small rural towns. My familiarity with both Easton and Snow Hill and the subsequent books I wrote on these towns, began with helping small towns all over the Eastern Shore through my job as an economic development field rep.
I have developed a keen interest in mystical places, or “thin places” where the veil between this world and the eternal world is thin. My book Haunted Eastern Shore; Ghostly Tales from East of the Chesapeake grew from this interest as did my writing on mystical sites in Ireland and the UK.
In my spare time, I write, I blog, ( www.travelhag.com ) and I talk incessantly about the places I visit. Travel is such an enriching experience. The only thing better than travel is enjoying our family and friends. We have six grown children and eight grandchildren, three large dogs and lots of chickens.
Jan:     In 1994 you started a publishing company, Trinity Music, Inc. that you later merged with The Pastoral Press, making you the only woman publisher of a sizable Catholic publishing house in the United States. Your company published liturgical music primarily for the Catholic Church. Before you sold it, you grew your company and acquired many out-of-print top sellers and put them back into circulation.  What are three of the most important things that you learned about publishing from your experiences?
Mindie: What a loaded question.  I learned so much – and most of what I learned are lessons writers never want to hear about.

1. Book publishing is not a profitable business.  It wasn’t then and it isn’t now except for small niche companies and even then, the profits typically aren’t large.  This is why so many of the small and mid-size publishing houses have been bought up or gone out of businesses.  The profit margin is so small and manufacturing costs are high and the market volatile. What a combination.  It gave me a new respect for publishers.

2. Most writers work more on getting published than improving their craft.  My editor used to say that there are two kinds of writers: one who can write and one who has something worthwhile to say to our reading audience.  Seldom do the two qualities merge in one person.  The vast majority focus on subject and never polish the craft.  Writing is a craft, just as carpentry is a craft.  You wouldn’t ask an inspired carpenter apprentice to build a mahogany desk. Nor would you ask a typical third year violin student to join a symphony. Good writing takes years of practice and observation. We rejected so many submissions and manuscripts simply because the writer’s lack of skill was so apparent.

Jan:     As a trained musician who spent twenty years serving as a Music Director in several Maryland churches prior to your moving to the Eastern Shore, how has your musical background contributed to your writing process.
Mindie:  Well, music is art and I became a composer before I became a writer.  My job was to select the music that would assist a congregation in sung prayer.  That was a huge responsibility.  Trying to connect with an assembly week after week and providing them with the tools they needed to lift their spirits, was daunting.  I see many directors who don’t care – or don’t believe in themselves enough to believe they can impact a congregation’s spirit.  They just muddle along making little difference. But when you, as a director make that connection – when you toss something to gathered community and that they shape into prayer – it’s intoxicating.  The whole thing becomes larger than the sum of its parts.  Refining that practice has served me well in writing.  I’m always thinking of my reader and how he or she might react to what I’m writing.  I try so hard to be real, to be open, to encourage the reader to do the same.  Though we are not physically present to each other, I secretly hope they are yearning to go to the places I’m writing about, and that they get caught up in the same wonder of that eternal world.
Jan:     You teach workshops that show people how to harness the power of the social media? What essential elements do writers need in order to build a solid social media platform?

Mindie:  I think it’s important to shake off the idea that using social media is marketing.  Successful use of social media is more networking – where you make connections that are beneficial later.  I see many writers that just shove their stuff out to the social media connections.  That’s boring and annoying.  Social media is social.  It means that you care about what your friends, connections, followers, etc. WANT to read, and you respond to them, in turn.  Then connections are real – just like friendships. I have many dear friends that I’ve never met.  Yet we are close.  They’d help me and I’d help them.  It’s a virtual network.  The power is in creating and building a network and finding a way to help people in your network.  Then when you need help, they’ll be there.  Who couldn’t use a few thousand friends.

Jan:      I recently spent some time reading your ‘Travel Hag’ blogs. How much time do you spend maintaining your web presence?
Mindie: Well, I work a full time job for the State of Maryland, so my time is limited.  Blogging takes the most time, but it is the most beneficial to me – a writer.  It’s the true test of … “is anybody out there reading my stuff?”  Before I get out of bed in the morning, I lay there a few minutes and put the bullet points of a blog post together in my head.  Then I run to the desk and get them down before I do anything else – ANYTHING.  No email, no facebook, nothing until those points are down.  That’s usually about 30 minutes of work.  I may work on a post for a few days.  Then up it goes.  On average it’s probably about an hour a day on social media, but rarely at one sitting.  I’m on the road constantly so I use my iPhone for most of my Facebook, Twitter and LinkedIn posts.
Jan:     What advice do you offer to writers about maintaining a balance in the face of so many media distractions upon a writer’s time?
Mindie:   The best advice I could give is figure out these social media platforms.  They are crucial to a writer.  The days of one-on-one communication are fading.  Get publishers, agents and media people into your social media networks so that you’re always in front of them.  If they don’t want you, they may refer you.  Working with a circle of connections all at once is the new communication.  I don’t look at social media as a distraction. It’s a time investment. My social media networks are an asset to my business, and an asset no one else can use like I can.  I’m not on these networks to be entertained, though it is entertaining.  It’s just a part of how we communicate now.  The young writers already know this because they’ve learned the platforms.  So it’s easily integrated into their practices.
Jan:      So if a writer only had time to build one or two social media sites which ones would be essential?
Mindie:  Start with Facebook.  Set a goal to make ten new friends that you’ve never met.  Develop the relationship by commenting and reaching out to them and watching for their response.  Once you build a relationship with someone you’ve never met you’ll catch on to how it works.  When you’ve done that ten times,  you will have figured out the platform.  Then you can maximize its benefits.

Blogging is also crucial to a writer.  Publishers look at blogs and how many followers and engagements there are.  The key to success in publishing these days is having the author equally promote the work.  It’s a partnership.  Having a successful blog where others engage shows the publisher you can attract a following.

Jan:     So what are you working on now and what is your next writing project?
Mindie:  I’m still working on Thin Places in Ireland.  I’d like to expand that to thin places in the UK and Brittany (France).  I’d also like to do some on thin places in the US.  I’m a travel writer and my interests lie heavily in Maryland, the western US and the southern US, particularly Charleston SC.
Jan:      Charleston, SC is an interesting place.  In fact, that’s where I was born. And I’d love to read about “thin places” there.  I wondered what advice has helped you most in your writing life? And what advice can you offer that will encourage writer?
Mindie: The best advice I was ever given was “polish your craft.” Writers need to assume responsibility for their own development. Becoming a better writer means reading the best writers in your genre and practicing, practicing, practicing –  while soliciting feedback.  Join a writers group.  You can do a writers group completely on line through email and social media.
I used to think writers were born with talent for writing.  I later learned that writers may have a little talent, but the practice makes them better writers, and practice with strong feedback increases competency.
Jan:     Thank you for sharing and taking the time for the interview.  Here are some links if readers wish to read more or perhaps schedule a tour to Ireland to explore “thin places” Mindie described in part one of this interview.
(Entry # 114) posted on Tuesday, November 27, 2012.
Mindie Burgoyne
www.TravelHag.com
5775 Charles Cannon Road
Marion Station, MD 21838
301.648.2010
Mindieb@gmail.com
SIGN UP FOR THE TRAVEL HAG NEWSLETTER (free)
Thin Places Blog
Who Cares What Think? Blog