Biographical Notes:
I am a writer and a traveler, with a ton of energy and wonderful travel partner (Dan Burgoyne). Together we roll along American roads with r-pod in tow, scouting out the best fishing spots, flatwater kayaking trails, historic towns, haunted houses, and the friendly people along the way.
My full time job is with the Maryland Department of Business and Economic Development, where I get to help businesses and local governments in Maryland’s rural Eastern region. That job first exposed me to the treasures Maryland has in her small rural towns. My familiarity with both Easton and Snow Hill and the subsequent books I wrote on these towns, began with helping small towns all over the Eastern Shore through my job as an economic development field rep.
I have developed a keen interest in mystical places, or “thin places” where the veil between this world and the eternal world is thin. My book Haunted Eastern Shore; Ghostly Tales from East of the Chesapeake grew from this interest as did my writing on mystical sites in Ireland and the UK.
In my spare time, I write, I blog, ( www.travelhag.com ) and I talk incessantly about the places I visit. Travel is such an enriching experience. The only thing better than travel is enjoying our family and friends. We have six grown children and eight grandchildren, three large dogs and lots of chickens.
Jan:    Thank you for taking the time to share your expertise with others. Your book, Haunted Eastern Shore: Ghostly Tales from East of the Chesapeake, sold out its first printing in six weeks and has been ranked as high as # 16 on Amazon for regional books. Now on its fifth printing, it continues to be a best seller for History Press.  What do you think has contributed to the continued interest in this book and its topic? 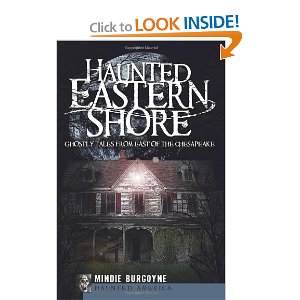 Mindie:   I think the book was a huge success for three reasons –

1. Ghosts and hauntings are one of the hottest niches in America.  At any time of the day one can surf the cable tv channels and find at least one program on ghosts.  The popularity of the subject is astounding so it’s easy to be successful.

2. A month prior to the book’s release, I started a Facebook page on the Haunted Eastern Shore.  The focus was not on my book, it was on the hauntings themselves.  Each week I’d post a little story with a picture and the response was overwhelming.  I had 1000 fans within a few weeks.  Fans were able to comment on my stories and images.  They could ask questions.  They could share their own stories.  Ghost hunting groups grew out of this fan page.  People flooded my book signings.  I started doing haunted tours.  It was a viral PR spread and continues to be.  The page now has over 8000 fans. https://www.facebook.com/HauntedEasternShore

3. The format of each story was very readable and targeted both young adults and adults.  I often had middle schoolers at my signings.  The format I used told the history of the place, the legend or tale associated with it and what people say now.  Those three elements I believe to be the trifecta in positioning a good ghost story.  Each of elements can stand alone, but when you bring them together it gives the reader an engaging experience and leaves them wondering.

Jan:     Tell me more about your new book, Thin Places: Celtic Doorways to the Otherworld, which focuses upon mystical sites in Ireland. What are Thin Places and are they found in sites other than Ireland? 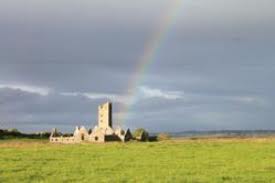 Mindie:  Thin Places are places where the veil between this world and the eternal world is thin.  They are spiritual places where we humans listen better to the voice of the Creator.  While God is present everywhere – and is the same yesterday, today and forever – thin places have an energy about them that helps us exercise our own spirits.  We feel differently in these places. We are more sensitive.
The place itself is thin.  We don’t make it so.

My book is about such places in Ireland.  I believe these special sites have a certain energy about them which is why people from ancient times to now have marked them as special with stone monuments, mounds, tombs, circles. Ireland is full of these sites and over the years the Irish people have remained sensitive to them.  The old belief in the Celtic tradition was that these places were points where beings from the other world, or eternal world, could pass in and out. They were doorways of entry.

Even today there is a strong reverence in Ireland for these thin places.  In fact, there is a recent story where the motorway going to Shannon Airport was to be expanded, but a fairy tree (Hawthorn, small tree believed to be linked to the elementals) would have be cut down to make the expansion.  None of the contracted construction workers would touch it.  They kicked the task back up to the Irish government and none of their workers would touch the tree.  So they built the six lane motor way around the small fairy tree.
Call it superstition, call it a sixth sense.  The sensitivity to spiritual places is very real in Ireland which is why I chose that location for this book.  There are thin places everywhere including the United States.  The indigenous people here had a great sensitivity to spiritual places and the legends to go with them.  Sadly, in most of the developed eastern United States we’ve obliterated anything memorable and raped the landscape, so the thin places have disappeared.  But they are very much alive in the west.  I hope someday to write about them.
Jan:     How do you know when you’ve found a Thin Place? 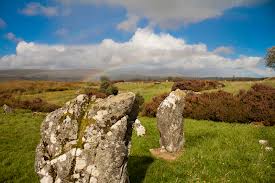 Mindie:  It’s not an electric moment usually.  In Ireland, it’s pretty easy because they’re marked.  You’ll see a standing stone, a dolmen, a tomb, a ring fort, rags on a fairy tree, devotional tokens.  The people there know the thin places.  For me, there’s an energy about the place.  In the beginning, that’s all I felt.  I’d feel at home, at ease, at peace.  Then I’d have an overwhelming connection with people who were there before.  I’d walk around the ruins of a cloister walk and find myself wondering about the monks who walked and prayed in the same spot so many years ago.  I’d touch a stone and wonder about the memories of that place where it stands.  I’d see a stone circle and imagine the community that built it.  But the biggest indication for me is happens after I leave.  I’ll feel a magnetic pull drawing back to the place.  I may not have even been that impressed when I stood in the thin place, but after I go I can remember every detail.  I find myself doing more research, trying to discover the story.  I’m pulled back.
Now, it’s comfortable and I’m used to finding thin places.  So if I stumble into one or go to one that seeking out, I silence myself and let the energy – or some might say spirituality – wash over me.  Then I’ll begin hearing in my mind answers to things I’ve had on my mind.  I’ll get clarity without even trying.  Going to thin places is like taking a trip to a spiritual spa.  You relax and exercise your spirit in an uncluttered environment.
The best thing I’ve found is that once you’ve been to a thin place, you can go there whenever you want – in your mind.  In my meditations I always place myself at St. Patrick’s Chair in Tyrone or White Park Bay in Antrim or the Rock of Cashel in Tipperary or Doolough in Connemara.
Jan:     You’ve written about mystical sites and paranormal events extensively. How did you develop an interest in exploring this topic?
Mindie:  The interest found me.  I was dragged into it.  I never liked the Irish or anything about Ireland when I was growing up.  It was too ordinary. Growing up in a small town in a big Catholic family, going to a Catholic school in a parish where my family was deeply engaged, everyone was Irish.  I had friends who asked me to go to Ireland back in 1992 and I went on a whim, thinking it might be fun.  I’d never been to Europe.  I was hooked when we visited the Rock of Cashel.  The magnetic pull began and I’ve been returning to Ireland ever since – seeking out more and more thin places.  Now I run an annual tour.  http://thinplacestour.com

Moving into a haunted house will wake up one’s interest.  The house I live in now is 130 years old.  Shortly after we moved in, strange things started to occur and then got out of control.  (the full story is in my book).  I began looking for more properties like mine and people who had experienced hauntings.  Then History Press called and asked me to write a book and I pitched the subject because I already had some research done.