V.V. (Sugi) Ganeshananthan is a fiction writer and journalist. Her debut novel, Love Marriage (Random House, 2008), was long-listed for the Orange Prize and named one of Washington Post Book World’s Best of 2008. Her work has appeared in Granta, The Atlantic Monthly, the Columbia Journalism Review, and The Washington Post, among others. She is the Zell Visiting Professor of Creative Writing at the University of Michigan, and a proud alum of Walt Whitman High School in Bethesda, Maryland, where she studied creative writing and journalism with Dr. Jan Bowman (Go, Vikings!). 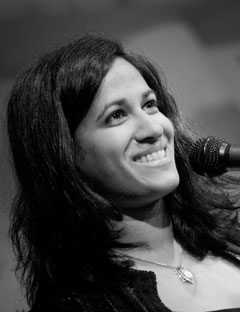 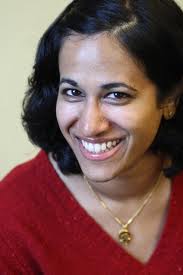 Sugi:     It’s not just gender; it’s also race. It’s my particular Venn Diagram of those two. I know my queer and disabled friends face obstacles too, so I appreciate having solidarity with them, and with others who have some sort of difference. Certainly, there are huge issues associated with being a writer who is also a woman of color; for example, people are much less inclined to read your work on its own terms, and much more inclined to expect it to be neatly representative, as though artists are the average of the groups from which they come! I find this frustrating. But hopefully people are becoming better readers and more progressive consumers of art. But until everyone is, it’s going to be a little… special. I’m not heavily into complaining, but I’m also not heavily into lying, so there you are. For some horrifying statistics and intelligent discussion about this, you can take a look at the work done by the fine people at VIDA, a women’s literary organization, or the Asian-American Writers’ Workshop (disclosure: I’m a former board member of the latter).

Jan:     I appreciate your taking time from your busy schedule to do this interview and I hope you’ll send me an email when your next book is published.
Photo Credits:  Preston Merchant
V.V. Ganeshananthan is a Sri Lankan American fiction writer, essayist, and journalist. Ganeshananthan is the author of Love Marriage, a novel set in Sri Lanka and North America, which was published by Random House in April 2008. Wikipedia
Education: Harvard University, Columbia University Graduate School of Journalism
http://vasugi.com/news/