Blake Gerard, a New York expatriate, is a graduate of the University of Florida, Florida Atlantic University, and Stuyvesant High School. He has published several books on the eighteenth-century satirist and clergyman Laurence Sterne as well as essays on the relationship between text and image. A former student of Frank McCourt and John Gardner, he has recently resumed writing short fiction and has seen his work published. He is the recipient of an NEH Summer Stipend and the Franklin Grant from the American Philosophical Society. And he is Professor of English at Auburn University at Montgomery, AL, and he is Co-Editor of the Scriblerian and the Kit-Cats. 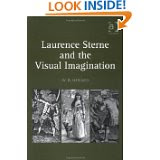 Jan:     Blake, thank you for taking time for this interview.  I wondered how your background in 18th Century British Literature and English Romanticism, in combination with your work as an English Professor at Auburn and your work as Co-Editor of the Scriblerian and the Kit-Cats, inform your writing, editing and teaching?
Blake:     The literature that is part of the work of professing is a wonderful enhancement to the daily drag, whether it be teaching or doing the dishes. I’d imagined this early on [while] in graduate school, that teaching college literature would be an excellent use of one’s time. And this fate of studying poetry and prose as a professional obligation, well – it’s held to be true. I get to range pretty far in my teaching—not only encompassing all of English literature in surveys, but also recently teaching Kerouac and Kesey— and eighteenth century texts offer so much stimulation in their innovation, while echoing their past;  there’s always something new and interesting to discover. It’s all that can be expected from any pile of books.
Jan:     A while back I read your dissertation on Laurence Sterne’s Tristram Shandy, Gentleman.  I remember reading that book as an undergraduate. I was fascinated with the innovative form and language.  What led you to focus on this book for your dissertation? 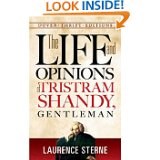 Blake:      I first became interested in Tristram Shandy during a satire course with Carol McGuirk at FAU, where it was introduced as being, well, impossible to untangle. I’d thought this as a challenge, and in my most ardent close-reading mode, managed to unravel some coherent threads; I ended up writing my thesis on the book. Fortunately, a major scholar (perhaps the major scholar) of Sterne, was Mel New, who was not far away at UF in Gainesville, Florida. The resources on Sterne at UF were everything one could hope for, and Dr. New was an incredibly well-grounded mentor to learn from (and a fellow Stuyvesant alumnus, it turned out).
Jan:     What discoveries came to you in researching this work?
Blake:     While prospecting through old editions of Sterne at UF, I came across some interesting patterns in illustrations—similarities between the depictions of certain scenes—that spurred my interest. I’d always been interested in the visual, and here material presented itself to feed the fire. I was fortunate enough to be able to study some more editions overseas, and the dissertation, and eventually the book, emerged.  By the way, Sterne turns out to be one of the most illustrated authors in the English language; I recorded around 1100 illustrations in almost a hundred editions. 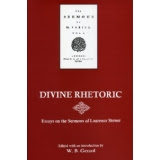 Jan:     The reviews and essays in the Scriblerian and the Kit-Cats, are known for “keen scholarly insights” and a “blessed absence of academic pedantry.” As Co-Editor of this journal, how do you find that balance of publishing scholarly work that is so readable?
Blake:     Editing the Scriblerian has truly been an educational experience. I’ve been lucky to be working with Roy Wolper of Temple University, one of the three editors who’d founded the journal in 1969. He’d carried on the tradition of making the copy as dense and important as possible—distilling the reviews into concise, sparkling nuggets of observation, which I’ve done my best to absorb. It’s a way of handling written expression that has permanently altered not only my approach to copyediting, but writing as well.
Jan:     What do you love about being a professor?
Blake:     As I mentioned earlier, the ability to be immersed in literature, in the imaginations of genius, as a career, is truly a privilege. And teaching requires the translation of that enjoyment for student digestion, so that they might appreciate it as well; if successful, it’s a gift that they can carry with them for the rest of their lives, a way of enlarging their world. 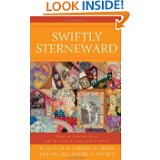 Jan:     And what’s a major downside to it for you?
Blake:     The downside is almost always the grading, not only the time that must be set aside for assessment, but perhaps more so – the realization that some of them didn’t get it. It tends to work against the natural optimism of teaching, but there’s enough success to act as a counter.
Jan:        So – what are you working on now? What is the focus and status of your current writing and research projects?
Blake:     I’ve been juggling between scholarship and fiction writing. I’m currently working with Dr. New on volume nine of the Florida Edition of Sterne’s miscellaneous writings, learning how to create a precise and useful critical edition. (This is especially rewarding as I’d used the Florida Tristram fifteen years ago to write my master’s thesis and would have never imagined my participation in editing the series.)
With writing fiction, the stories keep coming, and [stories] cry for care and revision in their finalization. Also, playing the fiction market is a part-time job in itself.
Jan:     What writer – living or dead – would you like to meet and what question(s) would you want to ask?
Blake:     I’m under professional obligation to say Sterne, who by all accounts had an ebullient and entertaining personality. I don’t think I’d have a particular question; just hearing his ramble would be edification enough.
Jan:     Let’s turn our attention to current literature and in particular, fiction. What’s the best movie made from a book that you’ve ever seen or seen lately?
Blake:     Mark Helprin’s A Soldier of the Great Warresonates from the last few years. It’s a long book, interweaving a luxuriant aesthetic with the unremitting grimness of the First World War. I’ve was also very impressed when I revisited Kesey’s One Flew Over the Cuckoo’s Nest. Its  unlikely locale still generating marvelous allegory.
Jan:     What book “stopped time” for you, which is to say you couldn’t put it down? And what are you reading now?
Blake:     Umberto Eco’s Foucault’s Pendulum and Gary Shteyngart’s Super Sad True Love Storycome to mind.  I’m currently slogging through Dave Eggers’s A Heartbreaking Work of Staggering Genius, which, when it’s good, is very good.
Jan:     What books over the years have most influenced your writing?
Blake:     It’s difficult to isolate single books—every well-read book seems to contribute something to the writer, especially if they’ve been pre-selected by time. A recent one that stands out is Moby-Dick, which I’d only read lightly years ago. Its voice and breadth were as inspiring as its compelling observations of human nature.
Jan:     What writing advice do you most often give to English majors in your program?
Blake:     I take it you’re referring to fiction writers in particular, of whom many promising ones have appeared in my classes over the last few years. Much of what I tell them is what has worked for me over the years and has been reinforced countless times by others: a writer has to be a craftsperson, honing skills through habitual practice; good writing isn’t something that comes to people (most people, that is) naturally, but is the result of much labor and concentration that never makes it into the finished story.
I suggest the analogue with the apprentice woodworker, who starts with small projects, learning the use of tools and techniques along the way; it might take years until the craft is mastered and really good work is produced. One should write because one wants to (or has to, as McCourt used to say), and patience is needed—after all, if a story is published, it will endure many years longer than it took to create.
Jan:     Thank you, Blake – Dr. Gerard, for taking time to give us an academic slant to the writing life.

William B. Gerard’s books are available through Amazon.