“Pinckney Benedict grew up on his family’s dairy farm in rural West Virginia. He has published a novel and three collections of short fiction, the most recent of which is Miracle Boy and Other Stories.
His work has been published in, among other magazines and anthologies, Esquire, Zoetrope: All-Story, the O. Henry Award series, the Pushcart Prize series, the Best New Stories from the South series, The Ecco Anthology of Contemporary American Short Fiction, and The Oxford Book of American Short Stories. He has received grants and awards from, among others, the West Virginia Arts Council, the Illinois Arts Council, and the National Endowment for the Arts. Benedict is a professor in the MFA program at Southern Illinois University Carbondale, IL and in the low-residency MFA program at Queens University of Charlotte in North Carolina. He will be on the faculty of the Tinker Mountain Writers’ Workshop at Hollins University in Roanoke, Virginia, June 9-14, 2013.”
Websites:
Amazon author’s page
http://www.amazon.com/Pinckney-Benedict/e/B000APB8RO/ref=sr_tc_2_0?qid=1347398999&sr=1-2-ent
Facebook page
http://www.facebook.com/PigHelmet?sk=wall
TMWW’s Facebook page
http://www.facebook.com/pages/Tinker-Mountain-Writers-Workshop/207327389334581
Gallowstree Press’ page
http://gallowstreepress.com/
Jan:     Pinckney, I am honored to have your interview as the 100th blog entry on my website that I began June 2011.  I appreciate your time for this interview; you are busy, but always the gentleman. You have so much experience dealing with the publishing world, and the peculiar problems on the publishing end for writers.  I would like to present two sets of questions. This week let’s talk about your new publishing company, Gallows Tree Press; then next week, let’s talk about your writing.
Recently you and your wife Laura Benedict, who is also an established writer, have begun Gallows Tree Press.  Tell me about it. What is the mission and what kinds of work do you hope to publish?

Pinckney:     At the moment, we’re just starting out. We’ve got three of my wife’s titles – got the rights to two of them back from Ballantine at great trouble and expense, and a new one. We will also probably begin to bring out my backlist as it becomes available, and new work by both of us. We’re also interested in starting a new annual anthology of horror fiction that we have tentatively titled Lightless Cities. When that’s established, we’d like to start publishing literary-quality crime and horror fiction, novels, since that’s what primarily interests us.

Jan:     What mistakes do writers often make when submitting manuscripts or proposals?  What would you urge writers to attend to before sending you work?
Pinckney:     Well, they’ll need to wait until we’re ready to start accepting work first! But here are some tips from the time I spent, with Laura, as editor of the Surreal South anthology series, which has had three volumes: read the submission guidelines very carefully. If it’s a prose fiction publication you’re submitting to, don’t send poetry or creative nonfiction on the off-chance that the editors will like it enough to change the nature of the book or magazine for you. They won’t. You’re not that good. Nobody’s that good. If it’s a horror publisher, make sure you’re sending them horror. 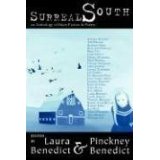 If the anthology has the word “surreal” in the title, make sure the work you send is in fact surreal. It’s actually pretty simple: Pay good attention to what the editors say they want, because they’re not kidding, and you’re trying to sell them something. Don’t let your own enthusiasm for your work, which is understandable, overwhelm your good sense.

Jan:     What’s your take on the health of print publishing and marketing methods for books, in light of technological shifts and the economy? And how do you see technology changing your own version of the publishing world?
Pinckney:     Technology is what’s making my little part of the publishing world possible. From my desk in my humble little home out in the hinterlands of southern Illinois, I can cause to be produced a book that is every bit the equal, in the quality of its prose as well as its presentation qualities (binding, design, cover, paper, etc.), of something that might be produced by, say, Simon and Schuster. It might even be superior. It will be cheaper, and I will not need a warehouse in which to keep my stock. It’s like the music world, where the CDs or the MP3s of your favorite local band are indistinguishable in their production values from the product produced by Sony. That’s a very good thing. Of course, it’s having some short-term effects that are upsetting to folks who have been long in the industry, but every revolution starts with blood and fire and heads rolling before you get to the good stuff. It always seems sad to the monopolists when monopolies are broken.
Jan:     What do you believe should be the focus for smart publishing houses to succeed?  And where do you see publishing powerhouses dropping the ball?
Pinckney:     Find writers whom you yourself would love to read, and publish the hell out of them. Don’t ever publish work you think somebody else might like, unless you yourself like it so much you can hardly bear the joy of it. Don’t try to publish too many titles. Don’t take a scattershot approach, where you publish a bunch of titles, knowing that many of them will fail (and that you will abandon those that don’t immediately rocket to the top), counting on one or two blockbusters to make up for all the “failed” books for which you deferred your responsibility. That’s the model of the current film business, which is languishing both in the quality of its product and in its bottom line, and it’s a model that’s destroying contemporary publishing. They’re pushing product, and much of it is bad, and much that is good gets neglected in the rush. They need to stop a minute and collect themselves. get their heads clear. They’re all in a rush to nowhere.
Jan:     What would be your idea of a great new kind of writer or an idea for an exciting novel that you would like your publishing company to introduce to readers?
Pinckney:     I’ve just read a novella (a form that I predict will have a renascence because of electronic and small-volume publishing) by a recent grad student of mine. It’s set in (as the author puts it) “a lonesome and barbarous failed state” that has reverted to Iron Age methods and morals. The young protagonist sets out across the barren tundra to find and kill the man who has destroyed his peaceful life and family. The prose is elegantly simple, and the book’s violence is relentless, remorseless, and utterly convincing. It’s a terrifying book that begs you to turn the next page, even though you feel you might not be able to bear what’s coming. It’s committed to another press, and we’re not yet set up at Gallowstree to take it on – but that’s the kind of book I want to publish. When we’re ready to go, we’ll ask this guy what his new project is.
Jan:     Will you consider publishing work from writers who don’t yet have an agent?  And can you talk a bit about how an agent helps the process and how they sometimes can hinder the process?
Pinckney:     We won’t deal with agents. We will deal only with writers who own the rights to the work they want us to consider and who will represent that work themselves. That’s how we ran the Surreal Southseries and that’s how we’ll run Gallowstree. Agents greatly complicate the process of getting art into the hands of people who might appreciate it.Perhaps they make sense when there are great sums of money involved, lengthy contracts and vast and complicated distribution deals, and when there might be a video game or a cartoon series based on a book – but that’s unlikely to be the case for anything we will publish.
Jan:     You said that you grew up loving a comic book series called ‘Weird War’ and that the visual, dynamic world found in comic books continues to influence your work. The Press 53 Spring 2012 Anthology includes one of your new comic stories. Do you plan to publish any comic book styled works at Gallows Tree?
Pinckney:     We’ll work first with conventional prose fiction, until we understand the business and its mechanisms better. But Laura and I have spoken about the prospect of our publishing my graphic fictions with Gallowstree. Once we’ve done that, then we’ll be better situated to imagine taking on the graphic fiction of others.

Jan:     Curious readers want to know more about the connections between Orgo, the hillbilly king, to the Romans and to Julius Caesar. Where did you get the idea for Orgo?

Pinckney:     Orgo is indeed a very Roman character, isn’t he? Unafraid of the brutal necessities of rule and of empire.  I am fascinated by the notion of kingship; as an American, I find it anathema, but it’s also somehow in our human DNA, the impulse to look to a king, a supreme leader whom we imagine to be somehow superior to ourselves, even though he’s probably completely nuts. And once the phrase “the hillbilly king” floated into my imagination, I knew I had to write about him. He’ll probably come back,  [yes] will Orgo, in some other future incarnation.
Jan:     I must say those are some amazing, but very dark drawings. I did find myself cringing a bit.  But it is fascinating work. It grabs the reader and won’t let go.
Pinckney:     “Cringing a bit” is fine by me – is in fact my intention – so long as the cringe doesn’t keep you from turning the page. Then I’ve gone too far, or you’re not willing to go far enough. I want my work, all of it, to exist on that fine threshold between being unable to stop going forward and wishing with all your heart that you didn’t have to. That, for me, is where good narrative art dwells.
Jan:     Given your past experiences working with movies, any chance Orgo will appear at a local theatre at some point in the future?

Pinckney:     I’d love to see an “Orgo” movie but have no idea how such a thing might come about. I’ve written film, a bit (Four Days is now on Netflix streaming), and recently the film version of my short story “Miracle Boy” premiered at the Venice Film Festival.It was shot not far from where I grew up in Greenbrier County, West Virginia, on a shoestring budget, and it looks very beautiful. But that’s the extent of my film involvement these days.